This article is brought to you by https://www.ebay.com/str/REALMcCOYBASEBALL 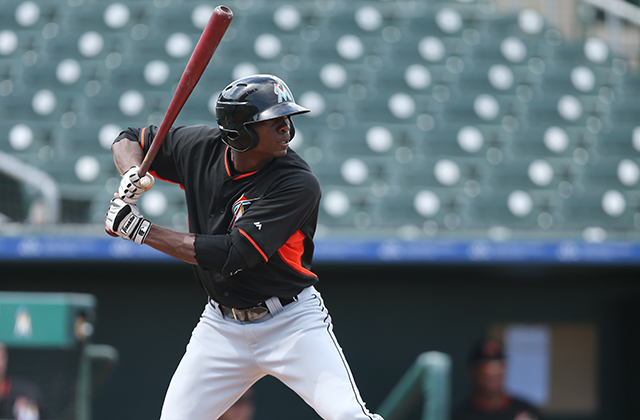 In the small city of Batavia, New York, MLB prospects are being grown. The NY-PENN League gives young players drafted by the Miami Marlins their first taste of professional baseball.

The Marlins must have really been impressed with Thomas Jones’ athleticism, as they went above slot to draft him out of Laurens High School (South Carolina) in 2016. An equally good football player, Thomas had offers from several Division I colleges to play safety. He could have developed into a more mature baseball player at baseball-famed Vanderbilt University, which he committed to as a center fielder. However, when the Marlins came calling with their number three pick (84th overall), Jones signed and joined the organization.

Thomas Jones, outfielder, made his debut in the Marlins organization in June 2017, and is growing into the player they expect him to be.

Jones appeared in 66 of the 75 Batavia Muckdogs’ games this past season. On the offensive side, he batted .181 with 10 doubles, four triples, and two home runs — all areas that no doubt will improve with maturity. He has a tall (6’ 4”), powerful frame, and as he sees more pitches, his quick swing will add to his power and boost his average.

Thomas has good wheels and will be disruptive on the basepath. What he lacked in offense this past season he more than made up for with his defense. He played 54 games in center, seven in right, and five in left. He owned a .982 fielding percentage, committing only four errors in his first season of minor league ball. With his speed, he easily covers the gaps in center. With his arm strength and accurate throws, he could easily adapt to all three outfield positions.

Jones’ defensive play and athleticism can be compared to Marquis Grissom, Coco Crisp, or Dexter Fowler with his quickness, energy, and alertness.

On June 26, 2017 (early in the season for the NY-PENN League), Thomas Jones and the Batavia Muckdogs played in one of the most thrilling games I have ever witnessed at the minor league level versus the West Virginia Black Bears.

The scene: 0-0 game in the bottom of the 10th, bases loaded, two outs, full count, the winning run 90 feet away, off and running with the pitch. Thomas Jones is up to bat. The pitcher releases the ball. Thunder, lightning, and heavy raindrops fill the night sky.

This night does not end with a heroic grand slam. It does not end with a drive to the left-center gap nor on a bloop single to shallow right field to win the game. In a game that was truly seconds away from being delayed by stormy weather, Thomas Jones watched a low inside pitch spin by him for ball four, and he triumphantly sprinted to first base with a walk-off walk. The Muckdogs mobbed Jones at first base. The celebration looked as if the World Series had just been won on what was now a soggy and muddy Dwyer Field.

This game was a classic pitchers’ duel that saw both starters go six scoreless innings and match each other pitch for pitch. A game where each team’s bullpen was equally impressive. A nail biter game that went into extra innings yet only took 2 hours and 19 minutes to decide a winner.

The starting pitcher that night was Sam Perez, the Marlins’ fifth-round pick in 2016 (and featured in a previous post). He tossed a gem, striking out three, allowing just three hits over six scoreless innings, and needing only 60 pitches to get through his portion of the night.

Thomas Jones will be 20 on December 9, 2017, giving him plenty of time to develop into the outfielder the Miami Marlins expected with that number three pick. The city of Batavia, that fateful night in June, and Jones’ athletic abilities all contributed to his growth this past season.